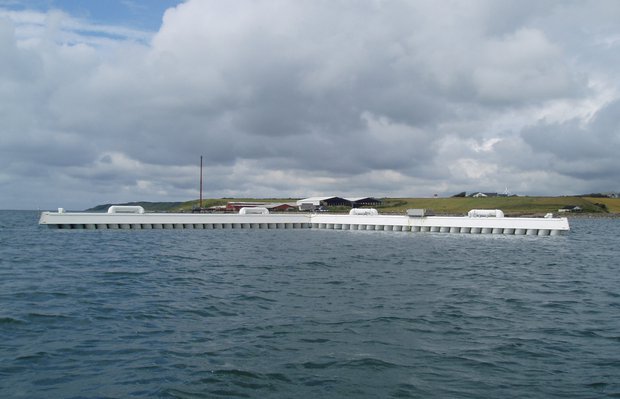 The manufacturing of the scale 1:10 WEC is completed and the WEC was launched in the sea in July 2015, where after the running in and test of sensors and data acquisition took place. The data acquisition were carried out by a CompacRIO system from National Instruments.

The picture shows the scale 1:10 WEC seen from behind. Each arm has a length of 16.4 meter and a own weight of 1,500 kg. These two arms are bolted together in a V shape whereby the total width towards the wave front is 24 meter.

In the second half 2015 the test and measurement of the loads that the WEC are exposed to, and the the energy production, was carried out. These tests are now completed and the WEC is brought onshore.

The scale 1:10 WEC has the following characteristics:

According to the time schedule the launcing and the testing of the scale 1:10 WEC are as follows:

The LEANCON Wave Energy Device Advanced in a simple way